The Mouse Paradigm: how markets affect our morals

The Mouse Paradigm: how markets affect our morals

How do economic markets affect our moral values?
This is a blog by Bec Sanderson
Bec is the Research Lead for the Public Interest Research Centre.

The life of a mouse is entrusted to your care. You can either save this mouse, and receive no money. Or play the market to bargain for its life, and accept that it will be killed.

This is the Mouse Paradigm, and it’s the subject of a recent study into how economic markets affect our moral values. The way we produce and trade goods, particularly in complex global markets, tends to produce what are rather clinically termed  ‘negative externalities’, or in plain English, social and environmental harm. This can mean the air and water pollution affecting villages near Chilean copper mines, or the street children in Kolkata whose livelihoods are directly affected by the price of gold on the international market. Often, these impacts are both difficult to grasp and easy to ignore. We all participate to some extent in these ‘externalities’ by our consumption of goods and services. But what role does the market itself play in our ability to turn a blind eye? And how do we react when these harms are directly and consciously connected with our own participation in the market?

The trade-off between money and the life of a mouse is one rather gruesome technique that can help us understand whether people make moral decisions differently in the marketplace. It’s a way to make a crude and explicit link between market interactions, and the costs that trade can impose on third parties that have no say in the bargaining process.

We know from previous work that the very idea of money can set our moral compass spinning. Kathleen Vohs showed this pretty comprehensively with a series of experiments, published together in Science which tested how subtle, non-conscious reminders of money affect people’s behaviour. One of the experiments had a lab computer set up to show dollar notes on its screen-saver, another one was in a room with a poster of different currencies on the wall, another had the participants playing a short game of monopoly – and all these reminders of money were enough to make the participants become measurably (but temporarily) more self-centered. They were less willing to help people, and preferred to go solo rather than join in with social groups, but they were also prepared to take on more work, and try harder at challenging tasks.

As Vohs stresses, this doesn’t necessarily show that “money makes us selfish”. What it does show is that money can change our immediate value priorities. It makes us place less importance on kindness and cooperation, and more importance on personal achievement and performance.

What about the marketplace? How does money affect us when we are active players in a bargaining and trading system? This is where the Mouse Paradigm comes in. By measuring people’s willingness to allow severe, negative consequences for third parties (or slightly more than just ‘negative’, for the poor mice involved!), we can compare how we make moral decisions in different contexts. But first, just to establish a baseline, the researchers looked at how people reacted when they had to make the decision on their own: a simple trade-off between letting a mouse live, or receiving a payment of €10.

In this case, no markets in sight, 46% of people were prepared to take the money and allow the mouse to die. Already this result is pretty surprising. Everyone was fully informed about the direct consequence of their decision – they knew the mouse was healthy and, if saved, could live for another 2 years. They also knew how the mouse would die, because they watched a short video on the process. There are probably many reasons why people responded like this to mice, which would be worthy of a separate discussion. (Not to mention the ethics of allowing social psychologists to conduct these kinds of experiments in the first place).

The second group of participants were faced with the same decision, but this time as players in a simple ‘bilateral’ market – one seller and one buyer. Like everyone else, they were told that “the life of the mouse is entrusted to your care”, but they now had the choice to negotiate over the price of the mouse with another player, with a possible €20 to split between them. So if they settled on a price of €8, for example, then the seller would receive €8, the buyer would receive the remainder of the pot (€12), and the mouse would die. This gave both parties a financial incentive (of roughly €10 each) to try and strike a bargain in their favour. If they decided not to trade at all, then the mouse would live.

When the market became bigger and more complex, people valued the mouse life even less. In the third part of this study, people were players in a ‘multilateral market’ – with nine sellers (nine mice) and seven buyers. This time, 76% of sellers agreed to let the mouse die in exchange for €10 or less. 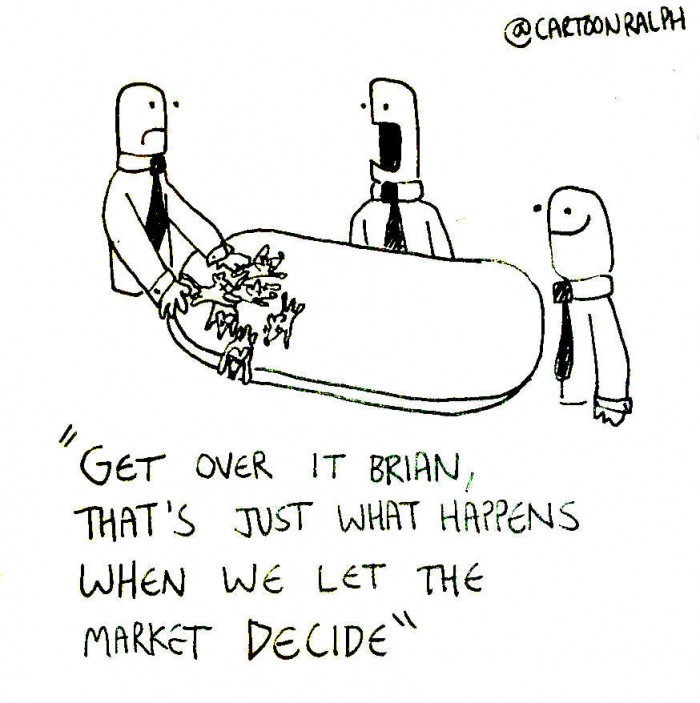 So we’re prepared to accept a much lower average price for a mouse life in market conditions, compared to when we’re on our own. What does this tell us about how market interaction impacts our morals? Why do we value an animal’s life differently when we make decisions as a market player? Here are some of the main suggestions from the literature:

1.   Market frames. We generally associate economic markets with values such as competition and wealth. As the authors of this study put it: “markets provide a strong framing and focus on materialistic aspects such as bargaining, negotiation, and competition, and may divert attention from possible adverse consequences and moral implications of trading.”

2.   Social norms. The way our markets are structured, and the social and environmental harm connected with our trade, sends us some indication of what’s considered normal and acceptable in society. We’re less likely to react according to our own moral criteria, when something is strongly endorsed by others around us.

3.   Diminished responsibility. The more players there are in the market, the less people feel personally responsible/guilty for the harms caused by trade.

That our moral reasoning is affected by interacting with markets should not imply a wholesale questioning of the role of markets in society. Economic systems have always been a fascinating and important element of our social structure, and they have reflected (and shaped) cultural values in myriad different ways. The Mouse Paradigm is one way to show that a market frame can bring certain values and expectations to the fore, which make us more likely to put economic valuation ahead of other important considerations. The studies we’ve just discussed are particularly interesting because they make the ‘externality’ absolutely explicit: everyone is fully aware that they will be directly responsible for the fate of the mouse. This suggests that the market context is itself formidable force, and there is only limited potential in appealing to the moral consequences of trading. We can highlight the social value of protecting the water supply near a Chilean copper mine, for example, but how much moral force will this hold if we have a stake in the copper market?

Clearly, this is an area of research that needs more work, and we can’t take this study as a blueprint for how markets affect our valuation of all social and environmental harms. Rather, we should take it as a recommendation to think harder about the impact of marketisation on our decision-making. How might markets impact the way we value each other and the environment?

As Michael Sandel says, “we have to ask where markets belong—and where they don’t. And we can’t answer this question without deliberating about the meaning and purpose of goods, and the values that should govern them”.