Is reframing climate change a waste of time?

Is reframing climate change a waste of time?

Communication on climate change must be viewed in a far wider context.
This is a blog by Tom Crompton
Tom is a member of staff at the Common Cause Foundation.

If nobody much cares about climate change, does it really much matter how it’s talked about? No, according to David Roberts. Rather, he argues, climate communicators and campaigners shouldn’t spend so much time worrying about how to ‘reframe’ their message. Is he right?

Part of Roberts’ argument is compelling. But this interesting bit risks getting lost because of his focus on one particular study.

Roberts highlights a recent letter in Nature Climate Change which looks for, but fails to find, framing effects.

Why should this study have failed to detect such effects, when so many others have found them? It’s difficult to know, of course. But it seems overly-exuberant, in the light of those other studies, to draw the conclusion that thinking carefully about how climate change is framed is a waste of time.

In another respect, though, Roberts’ argument has real weight: communication on climate change must be viewed in a far wider context.

“To a great extent, those preexisting social and psychological commitments — which are outside the scope of any conceivable climate communication campaign — are going to determine how people assess a specific phenomenon like climate change.”

We know that, very important among those ‘preexisting social and psychological commitments’, are values. Deep concern about climate change, support for ambitious policy interventions, and motivation to get out and make a fuss about it (joining a demonstration, volunteering for a pressure group, lobbying a politician) are all related to the values that a person holds to be important.

We also know that engaging some values strengthens expressions of concern about climate change. Here’s one study we conducted which found this. And here’s a useful summary of many comparable ones.

But such effects – real and important as they may be – are going to be rapidly ‘washed out’ by many other aspects of day-to-day life. Roberts is dead right that climate change cannot be simply split off, and dealt with separately, as though all the other influences we encounter daily are irrelevant.

In terms of the things that shape our values, climate change communication is a drop in the ocean. That’s an ocean deep and wide, made up of a vastness of advertising, boundless expanses of celebrity gossip and a flood tide of economic bulletins about the Dow Jones or FTSE 100. In other words, many of the communications we receive every day are likely to engage and strengthen values opposed to those that underpin concern about climate change.

This is one very important reason why, as Roberts points out, “danger of climate change does not arouse much public passion.” 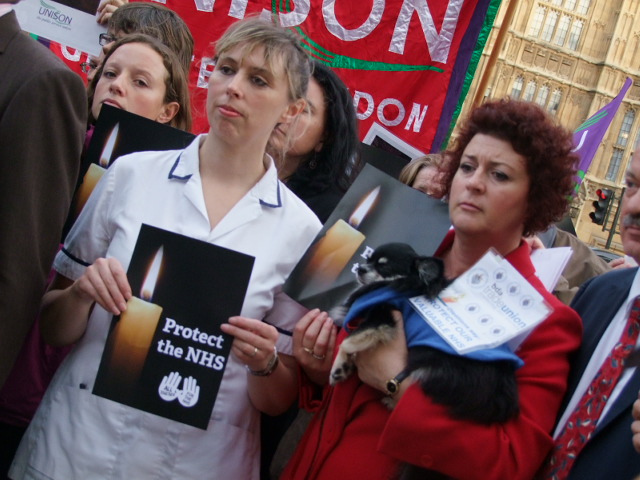 I experience the NHS both as someone who sees a deduction on my pay slip each month as a contribution to its cost, and as someone who rocks up to the doctor and leaves without paying. These are more impactful aspects of my day-to-day experience than my exposure to communications about climate change.

Such experience serves to reinforce my perception that public goods – such as universal healthcare – are normal and expected things in society, and that the cost of these should be borne collectively.

Such experience is also likely to strengthen my support for policy interventions to help safeguard another public good – a safe climate.

In both cases, I am invited to support policies which are in the common interest, without asking whether they justify the personal expense or inconvenience that they might entail. There’s an ethic here which defies simple cost-benefit analysis.

Reframing the NHS in transactional terms – inviting me to reflect on whether I ‘get as much out’ of the NHS as I ‘put in’ would be deeply corrosive. Public support for the NHS would collapse if people began to think in those terms.

Coming to think of the NHS in these transactional terms would, I predict, also undermine public commitment for ambitious action on climate change.

Here it would be unhelpful for me to ask whether the personal impacts of ambitious climate policy cause me more inconvenience or expense than it delivers personal benefit.