A brilliant example of showing solidarity across causes based on a recognition of shared values.
This is a blog by Angela Rutter
Angela is the co-founder of Common Cause Australia.

Recently Australians were asked via a non-compulsory postal survey “Should the law be changed to allow same-sex couples to marry?”

This was an important moment for Australians to show that we are a society that holds compassion, equality, justice and love at its core. It was also an important moment for civil society organisations and institutions, such as the Australian Conservation Foundation (ACF), to demonstrate the society they stand for. ACF is a national environment organisation with a community of ½ million people who stand up, speak out and act for a world where nature thrives. It has done this for over 50 years through to this day. While ACF is an environment organisation its constitution expresses commitment to the values of equality for all. Marriage equality seen as “an issue” can appear unrelated to caring about nature, however both are deeply related to a compassionate society with values of equality, justice, community and nature. The case for recognising the interconnected impact of the practices of organisations has been well advanced by Common Cause. One organisation engaging compassionate values, irrespective of the organisation’s primary cause, strengthens all: my cause is your cause is our common cause. 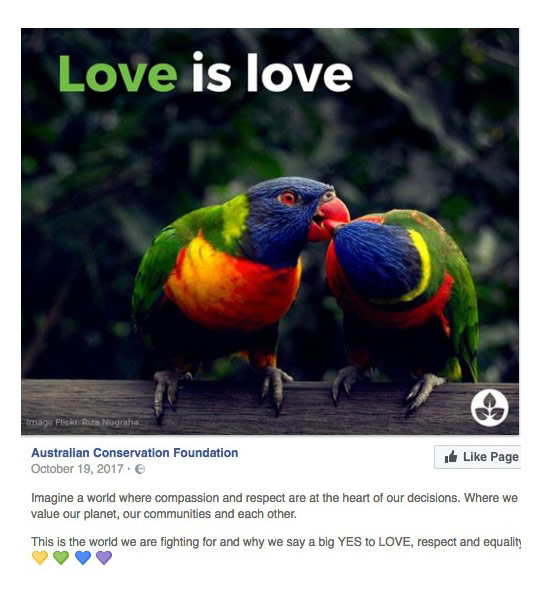 Two weeks before the Marriage Equality survey closed ACF sent an email to their community. The email drew upon universalism & benevolence values through images and text evoking connection, unity & a world we are for. It was helpful, providing a link to find postal box locations for people who hadn’t posted their survey. It engaged a world of beauty, equality, social justice: for those who had posted their survey there was a social media shareable of an image of rainbow lorikeet birds with the words ‘love is love’. It quoted Martin Luther King Jr – “injustice anywhere threatens justice everywhere”- reminding us no cause is an island. The email was from ACF’s President and CEO.

ACF received a big response. Across email and social media there were shares, comments and questions – with positive sentiment outweighing negative & questioning sentiment 2:1. This was a novel tactic from ACF, a more explicit explanation of the strategy may have reduced questioning and helped people to understand the common cause and motivation for a more compassionate world.

It was the largest response to any email previously sent by ACF, undoubtedly magnified by the high profile & engagement of the nation and the presence of the issue in everyday life. People were having conversations with family, friends and colleagues (have people received / posted their survey; views on voting); media channels were vigorously reporting on the issue & politicians commentating; posters were displayed by shopkeepers and institutions; campaign organisations and pollsters were putting out the latest predictions on the result along with other communications to encourage people to vote. Many, many other civil society organisations got behind the campaign, such as Cricket Australia, Fred Hollows Foundation and the Asylum Seeker Resource Centre.

It highlighted a shared vision of equality, justice and compassion – whether played out in environmental, climate, racial, gender, economic or other realms – as a ‘common cause’ for all civil society and a way forward for future transformative campaigning.

And the national survey results themselves?

79% of eligible Australians voted. It was the highest participation rate for any issue put to the Australian public.
62% said ‘Yes’ to the question “Should the law be changed to allow same-sex couples to marry?”

If the survey was a referendum it would have easily achieved the ‘double majority’ to pass. Along with the national majority, every state and territory voted ‘Yes’.
If ‘Yes’ were a political party, it would have won with more votes than any party in a general election.
If ‘Yes’ formed government, it would have the strongest majority ever awarded by its citizens – winning 133 seats out of 150 and every Senate seat.

The vote for marriage equality was a heart-felt roar from Australians for love, equality and a compassionate society. It was also a show of what’s possible when organisations campaign for a common cause and the better angels of our nature.