It’s (not just) the environment, stupid!

It’s (not just) the environment, stupid!

Why climate change shouldn’t just be framed as an environmental issue.
This is a blog by Dr Rachel Howell
Rachel is a Research Fellow at Aberystwyth University.

People who cut their carbon footprint because they’re worried about climate change are ‘environmental’ types, right? They love ‘nature’ and get fired up by those photos of polar bears stranded on melting ice. They might even rate ‘protecting the environment’ or ‘respecting the earth’ as their number one value.

Well, no; not necessarily.

As part of a research project on promoting lower-carbon lifestyles, I interviewed people who have cut their carbon footprint because they’re worried about climate change, to try and understand more about what motivates them. Concern about ‘the environment’ for its own sake is not generally their main reason for action. They tend to be more bothered about the effects of climate change on poorer people in developing countries. They’re often motivated by a deep sense of the injustice of a situation where those who will suffer most are those who have contributed least to the problem, and they talked in terms of trying to live with a fairer – therefore smaller – share of the world’s resources. When I asked them to imagine that we live in a different kind of world, one in which climate change would threaten polar bears with extinction but would somehow have little effect on humans, several interviewees said they would probably not be so anxious about the issue, and would not be trying so hard to address it. 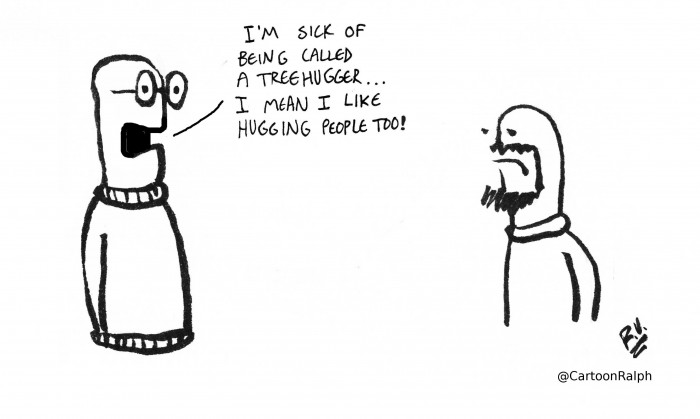 Moreover, their stories about how they’d got engaged in climate change action were about human rights groups and issues as often as environmental ones. Sally said that because she believed that all the gains she’d worked for in terms of women’s rights in developing countries were threatened, “it was probably actually feminism which brought me into climate change.” Deepta explained that many of her friends in her university Amnesty International group were also involved in environmental campaigns so she joined in with them too. David talked about growing up in South Africa, where “you really had to have a view about what you thought of race discrimination and so on.” This led to political and social awareness that developed into concerns about many issues, including climate change.

It seemed to me that these were people who cared about the environment but who cared even more about people and social justice. To check this, I asked interviewees to answer a short questionnaire testing the strength of ‘biospheric’ (environment-centred), ‘altruistic’ (people-centred), and ‘egoistic’ (self-centred) values as guiding principles for their lives. The top-rated value was ‘social justice’, with ‘equality’ second. ‘Protecting the environment’ came third, and ‘respecting the earth’ was only sixth (after being ‘helpful’ and ‘a world at peace’). The majority of interviewees scored higher on the altruistic values scale than the biospheric one. Not surprisingly, they scored egoistic values low.

I also asked interviewees “what images come to mind with the phrase ‘a low-carbon lifestyle’?” Although many gave a list of things to do (or to do without), some offered quite different ideas:

“Somehow I see sunshine. Yeah, lightness actually. Brightness and a sort of small place to live. Green grass and everything bright. There’s something healthy about that. Healthy and wholesome I suppose.” (Aileen)

These aren’t images that would translate into ‘carbon reductions per year’. They show that lower-carbon lifestyles are associated, at least for some people, with a much broader vision of ‘the good life’, and benefits such as health, happiness, and community. This also seemed to be true for some of the people who answered with the more typical list. For example, Claire thought fewer cars on the streets would be “lovely” because people would interact and not have to worry about traffic. Prue repeatedly stressed the satisfaction she gains from cycling (“it’s not only that you are not using resources, but you see a neighbour and you stop and say hello in a way you don’t when you use the car”) and buying local produce (“you are eating healthily, and you’re saving money”).

To me, perhaps the most remarkable finding was that some of these highly motivated people weren’t even that keen to talk about climate change. They thought the phrase was off-putting, or they were irritated by it because it’s overused, or they were simply not that interested in climate change. One person said she didn’t think you even have to believe in climate change to want to live a lower-carbon lifestyle, because of the benefits you’d gain from it.

These findings have important implications.

For example, appealing to altruistic values and to desires for things like quieter streets and stronger local communities may be more effective ways of encouraging people to change their behaviour than focussing on information about climate change impacts on the natural world.

People who want to promote lower-carbon lifestyles might find it worth working with human rights and development groups, and with organisations that place emphasis on altruistic values, like many religious groups. Development charities such as Oxfam and Christian Aid are already campaigning on climate change, but more could be done to make links between the concerns of organisations promoting women’s, children’s, and refugees’ rights and welfare and the potential impacts of climate change on these groups.

The wide-ranging positive visions of what ‘a low-carbon lifestyle’ means to people, and the fact that ‘climate change’ is not necessarily seen as interesting suggests that action campaigns should promote a much broader, more holistic view of a lower-carbon future, not just a ‘to do’ list to ‘combat climate change’. People do need information and advice about what action they can take, but “Ten Tips to Save the Planet” type messages may not be the best way of framing it – or not for everyone.

Obviously, these interviewees are not typical of the general population, but if “It’s the environment, stupid!” is not a catchphrase that really captures the range of motivations of even these committed people, the approach it represents is probably even less likely to inspire widespread behaviour change among the general public. Climate change is a complex problem with social, economic, political and ecological dimensions. This research suggests that it shouldn’t be framed merely as an ‘environmental’ issue by those who hope to engage the public in dealing with it.

All names used in this post have been changed.