A participant reflects on the Common Cause Action Learning Process.
This is a blog by Tom Pollard

One year ago, I signed up for the Common Cause ‘Action Learning Process’ and started a journey with a group of campaigners from across the charity sector. Although we were all working on different issues (disability, international development, climate change) we shared a hunger for new ideas on how to campaign in a way that could reach out to more people and achieve fundamental changes in society.

Some initial reading around the theory of values and frames had enticed me in, but I was unsure of what to expect from the course. Although this theory provided the backbone of what followed, it was the process itself, and the people I shared it with that really stuck with me.

As the course unfolded over six months (we only met up one day each month but we had homework!) we were encouraged to try out some of the ideas and techniques that we were exploring in our work and within our organisations. I was fortunate enough to be in an organisation that was open to new ideas such as thinking about how we engage with people’s values through our campaigns; the importance of living out our values in our work; and the power of personal relationships and stories in campaigning.

All of this was really valuable, and has had a lasting impact on how our team works. However, I felt that I hadn’t yet found a way to make full use of all that I had learnt.

At the same time, I was grappling with the problem of how we could support people with mental health problems to campaign locally. Many charities are rethinking how they campaign in response to a changed landscape of localism and the realisation that, in the age of social media, anyone can run a campaign. I was fully onboard with the idea of building local capacity to campaign but for people with mental health problems, as in many areas of life, there would be additional barriers to overcome.

Following a chance meeting with one of the co-ordinators, I had been inspired by the Mental Health Action Group in Derby (a service user led campaigns group). I was impressed not only by their passion and commitment but also by the fact that the members reported that being involved was really positive for their mental health.

I wanted to replicate the model of this group and we set about trying to design a process that could help others to start their own groups in this mould. We quickly realised that the learning from the Common Cause ‘Action Learning Process’ could be key to making this process work. 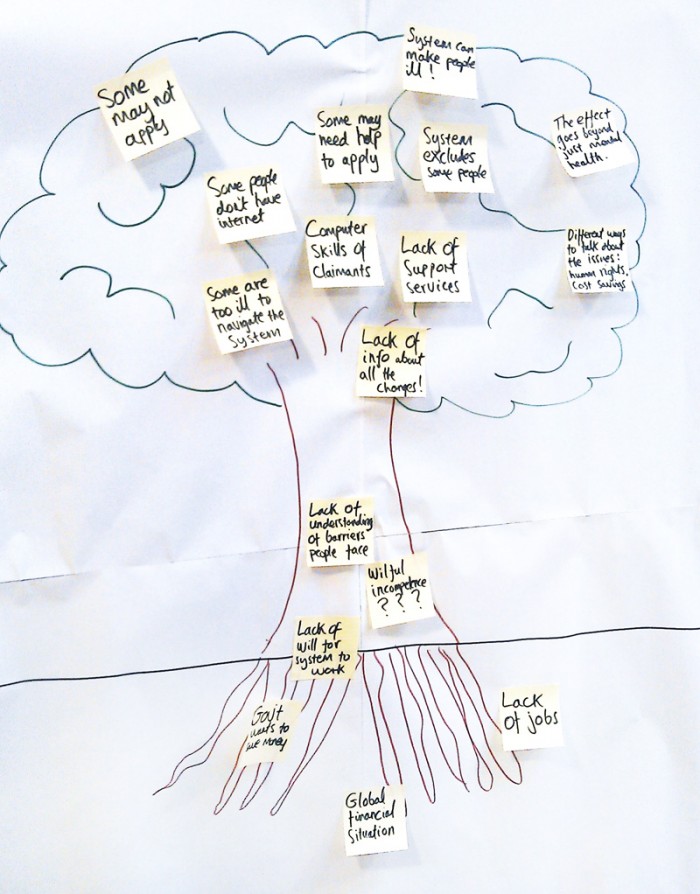 Seeing relationships as the foundation of campaigning meant that we decided the process would need to help people to connect as a group in order to become a force for change, rather than just understand campaigning as individuals. On the basis that people’s values and frames are shaped by experience, rather than simply being told, we knew that the way we structured the process would be as important as the content. And we knew that the tools and techniques used in the ‘Action Learning Process’ would be useful in shaping how we designed our process.

On the basis of this thinking, we designed a process that incorporated activities such as:

We ran three afternoon sessions over consecutive weeks with service users at Southwark Mind. The first session was all about ‘connecting’, the second explored what we mean by ‘campaigning’, and the third was about helping the group with planning how they would work together. It was a great experience and as big a learning curve for us as the people involved.

We received some really positive feedback from the people who took part about what they found useful from the process:

“Getting to know people, hearing about issues, getting angry, feeling like change can happen.”

“Learning the importance of involving personal experience in a campaign and connecting with others of similar experiences. I have had years of getting nowhere because I approached the issue alone.”

“Attending helped my self esteem and confidence in being with and working with others.”

Although it’s very early days and the group is fragile in its infancy, I am hopeful that they can go on to make a real difference to both their local area and their own lives. Meanwhile, we’re thinking about what we can learn from the process and how we might roll out our efforts to help people with mental health problems become campaigners.