What have the immigrants ever done for us?: Five reasons why the economic argument for immigration is destined to fail

What have the immigrants ever done for us?: Five reasons why the economic argument for immigration is destined to fail

Taking a look at some of the reasons why making the economic case for migration isn’t likely to work, and, in fact, could massively backfire.
This is a blog by Bec Sanderson
Bec is the Research Lead for the Public Interest Research Centre.

“Immigrants: don’t you just love ‘em? They travel to Britain from far-flung lands, coming here to toil away in our shops and offices and homes, paying their taxes and generally making us all better off.” – The Telegraph, June 13th 2013.

On the Australian campaign website, Kick a Migrant, you’re encouraged to chuck an immigrant into the sea (“as far as you can”). I’ve just hurled Kumar into the shark-infested sea, screaming. As soon as he hits the water, I’m confronted by a box condemning what I’ve done: Kumar was a scout-leading, local employment-improving, community man. But totally overshadowing this is a big, bold, red dollar sign and a large negative number: what I’ve cost the Australian economy by kicking Kumar out. Subversive, I think.

Immigration is a regular hot potato. It’s surrounded by economic myths: immigrants cost the health service millions, “they” are taking “our” jobs, they’re claiming loads of benefits and taking “taxpayers’ money”. But recent figures from the OECD show that – much like the Australian campaign – immigration has provided net economic gain for the UK. Great. I guess we can all stop arguing about it, and Nigel Farage will go away and leave us in peace? Sadly, I think there are five reasons why not.

The first reason is that we don’t respond to new information like the solution to an equation – adjusting our conclusions in line with the updated figures. We’re more like a pinball machine, if anything. We evaluate information through several buffers: our existing beliefs (“does this fit with other things I know?”); the values we hold dear (“does this relate to things I think are important?”); who tells us (“do I trust this person?”); and the way it’s presented (“what’s written between the lines?”).

“I suspect that some people who read this post won’t entirely agree,” wrote the author of the Telegraph article quoted above. He had nearly 700 responses. Some choice comments are below:

“Crude figures and crude statistics are regularly trotted out to suit the establishment agender [sic]. This has been the case for many years, with malleable data, capable of interpretation to the bent of the government of the day, then used to deceive the public and to reinforce the liberal- left view.”

“Why should we believe these figures for one single second when our own eyes tell us they are rubbish?”

“Immigrants are drain on the Countries [sic] wealth. They will work very hard for little pay but it is a black economy no records no tax [sic] and they draw benefits as well.”

While these might be at the extreme end of the scale, research shows that this is a natural reaction: if the facts don’t fit our worldview, they often just “bounce off”. Ideology and values are two of the main factors in how we process information, and are strongly linked with our social attitudes (such as support for immigration). Research shows that there are particular values that are most associated with anti-immigrant sentiment. These are values around maintaining the status quo, stability and tradition like tradition and security and those that are about self-image, wealth, and social recognition: extrinsic values, particularly power.

These values are connected with resistance to change and concern about social stability and private wealth. They’re also linked with a whole host of anti-social attitudes such as racism, sexism, and other prejudices towards “other” groups. So while the arguments are about economics on the surface, there might be something quite different underneath: concern about British cultural traditions being lost, about the breakdown of communities, or a lack of concern for people who are “different”. An argument on economics isn’t going to change any of this. It also means that the people who do care most about economics are also the least likely to be accepting of people of other ethnicities, cultures and religions. Another common concern was summed up in this comment:

“An Oxford professor has claimed white Britons ‘will be a minority’ in the UK before 2070 if current population trends continue.’ ‘ The proportion of minority groups living in Britain will rise from 10% in 2006 to 40% by 2050, the Migration Observatory at the University of Oxford said.’ Absolutely terrifying and a consequence of Liblabcon’s anti British [sic] open borders policy and our EU membership.” (emphasis added)

Once we hold a belief strongly, we find it particularly difficult to believe counter-evidence. Weirdly, we sometimes become even more entrenched in our original beliefs when presented with counter-evidence. In one study, US conservatives were shown fake news stories in which the existence of WMDs in Iraq was first suggested, by President Bush, and then refuted. Participants were more likely to believe there were WMDs than before hearing the counter-claim. One explanation is that counter-evidence provokes people into thinking about counter(-counter)-arguments, which ends up bolstering their previous beliefs.

2. We care about more than money

People who care about selfish gain or money over everyone and everything else are actually in the minority. Most people think intrinsic values (concern about other people and the planet) are more important than extrinsic ones. Research shows that we’re much more likely to be accepting of policy changes or persuaded by information if we are told that there will be social benefits over economic ones: that it will support local communities, that it will make us a more compassionate society, or that it will improve wellbeing. This is true of those on both the left and right. 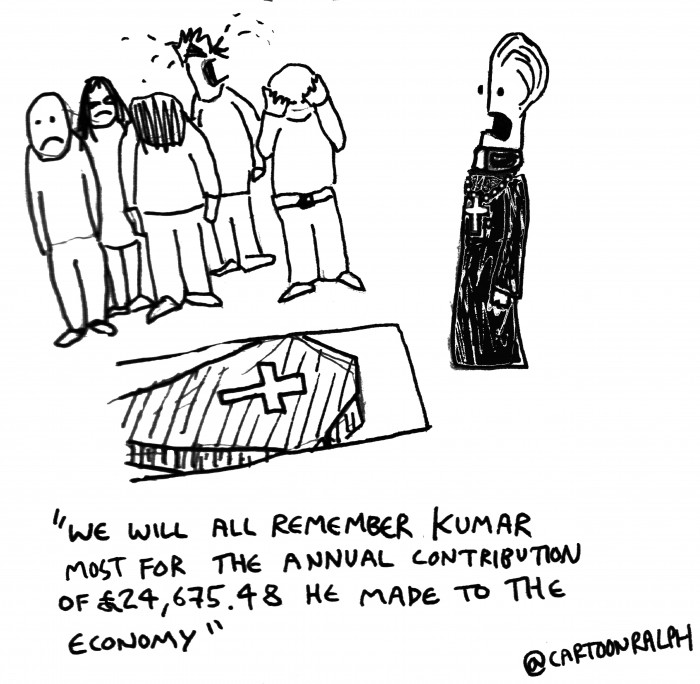 3. When we value money more, we value people less.

Whatever we are most concerned about, whether it is power and influence or people and planet, we respond differently to information depending on how it’s framed. This is because words and ideas are linked in our brain “like Christmas tree lights – apply power to any part of one set and the whole lot light up”. Thinking about ‘money’ reminds us of particular ideas and attitudes, linked through a common set of values (wealth, power and security). Studies show that just thinking about money makes us more accepting of social and economic inequality, less motivated to help others, and more concerned about ourselves. Thinking about consumerism, wealth and image makes us less likely to want to cooperate or get involved in civic or political action. And offering economic benefits actually makes us less likely to do something that’s also socially or environmentally good, such as recycling or doing something for the community, than if we weren’t offered anything.

In other words, if we argue that immigrants might benefit us economically, we’re less likely to care about immigrants as part of our society, or about their wellbeing, or even about our own social groups. We’re also less likely to want to sign a petition or work together for society’s benefit.

4. We’re creating a “common sense” that only includes “economic sense”

The cognitive linguist George Lakoff has argued that frames that we use repeatedly become our “common sense” until it is very difficult to reason outside of them. In other words, if we keep talking about whether things are “good for the economy”, this becomes our main frame of reference for judging something. We can see this already in public debate: whether it’s about renewable energy, childcare or the arts. This creeping domination of a particular frame – complete with the values associated with it – is something that Lakoff argues can be manipulated by political (or other) groups to push long-term ideological shifts in populations. And we implicitly reinforce the frame every time we use it: even if we feel like we’re making an opposing case. Lakoff’s famous example is of the Republican’s use of the phrase “tax relief” – implying tax is a burden. Every time the Democrats used the phrase, even to argue in favour of higher taxes, they were implicitly reinforcing the idea that tax was bad.

When we argue that immigration is good for the economy, we implicitly reinforce the (already dominant) idea that the key concern is the economy. Most social justice campaigners would agree that the economy is only useful for what it gives people and the environment. What really matters is how happy we are, how connected we are to each other, how fairly we are treated. The (purely monetary) economics of immigration tells us nothing about this.

The ideology behind the economic frame is that participation in the market is what ascribes our worth. This frame is incompatible with a ‘civic’ or ‘social’ frame, because of the values underpinning it. The question is: do we want a future where everything needs a price-tag to be given any attention?

5. Not everyone wins the economic case.

Not everyone is of measurable benefit to the economy. The argument excludes both immigrants and non-immigrants who lose their jobs, have sickness or disability benefits, or need patching up after a car crash. Another commenter on the Telegraph article:

“If you have the ‘right’ type of immigrant. Namely the rich, who spend and invest”

Underlying the frame is an ‘us and them’ mentality which only serves to divide, and can’t be the basis of creating a compassionate society. In fact, it actively reinforces the ‘deserving’ vs. ‘undeserving’ frame that is being successfully used to undermine support for welfare in the ‘strivers’ and ‘shirkers’ debate. Unhelpful to many social causes, in other words

So while writing about the benefits of immigration in the right-wing press is brave and commendable, I don’t believe the economic case will change anyone’s mind. In fact, I think it is likely to be damaging to social justice causes in the long term. And while humour can be subversive, I think Kick A Migrant is pretty loyal to the status-quo: slotting neatly into that market frame, and failing to challenge the idea that something has to benefit ‘us’ to be worthwhile.

What’s the alternative? In the US – which has a more explicit focus on ‘framing’ in politics – an organisation called the Opportunity Agenda have written a strategy for moving the debate on immigration forward, which is strongly based on intrinsic values. It includes “upholding our nation’s values… [such as] fairness and accountability” and “moving forward together”, and suggests framing such as “We need a system that protects all workers from exploitation and depressed wages and allows us to all rise together. Harsh policies that force people into the shadows are not consistent with our values.”

But it’s not all about what words we use to talk about an issue – it’s the experiences that we have that really matter. If you’re looking for an example of an organisation doing this well, City Of Sanctuary are recommended. They have groups all over the UK, aiming to build relationships between asylum seekers, refugees and the wider communities. Rather than focusing on the benefits to any group, they create local conversations around care, justice, and inclusion. Social activities are designed to bring diverse groups together and build community.

So, a few suggestions:

What about, in the vein of Meet a Muslim, Hug a Migrant…?