What do rivers dream about?

What do rivers dream about?

A project inviting people to re-engage with their intrinsic values towards the river Dart.
This is a blog by Josh Levene
Josh is an independent consultant and associate with the Bioregional Learning Centre.

In New Zealand, the indigenous Maori there have a saying that “I am the river, and the river is me”. In 2017 the Whanganui river in New Zealand was given legal personhood with the rights not to be harmed and to flow freely from source to sea. Any person could, on behalf of the river, go to court if they felt that these rights were being infringed. 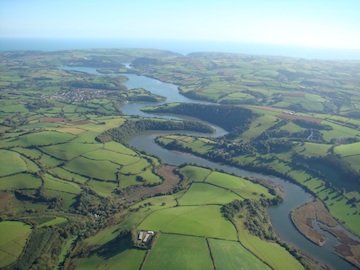 Could the same be done to protect rivers in the UK? The Bioregional Learning Centre, a small UK non-governmental organisation based in Devon, wanted to find out. So, alongside the South Devon Catchments Partnership and the Dartington Trust, it set itself the challenge of creating a charter for the river Dart, one of the most iconic rivers in the UK. Charters are nothing new to the UK – the most famous being the Magna Carta which was issued in the reign of King John in 1215. More recently, a charter for Falkirk, Scotland was developed which helped secure a moratorium on local fracking. A Dart charter would aim to reflect peoples shared values and what they care about the river and help engage communities in co-stewarding the water in the Dart catchment in partnership with statutory authorities and landowners. It would give rights to the Dart water cycle, while local people would protect those rights.

While Charters and other forms of legislation have the potential to leverage change, we need to be aware they will only be upheld in accordance with peoples existing beliefs, values and norms about their relationship to the environment. As Meadows points out in her work on leverage points, dominant paradigms will trump laws – culture is king!

The challenge we had with the Dart is that the Maori’s deep spiritual connection with the river did not obviously exist in the people along the Dart. That’s not to say that people in the UK don’t care about the environment; it’s simply that unlike the Maori, we have only a dim, unconscious perception that our own health and wellbeing is dependent upon the health of the environment we live in. Even the term ‘the natural world’ suggests that we humans are something separate and unconnected with it. So, to many the river Dart may be perceived as simply a resource, ‘natural capital’, scenery, a playground, or even a hazard – and this is how it is managed: according to its extrinsic rather than intrinsic value. Consequently in order for the charter to be upheld we first needed to go about reconnecting people with the values that could underpin it. 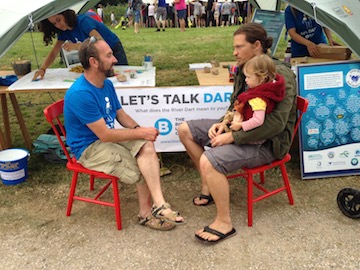 The way we have attempted to do this is to invite people to re-engage with their compassionate (intrinsic) beliefs and values towards the river. By doing so, we hoped to try and create a common culture of care towards it which in turn would support the development of a charter for the Dart.

Since the summer 2018, clad in “I’m 64% Dart” T-Shirts*, our team have implemented a series of community workshops and ‘Let’s Talk Dart’ pop-up stands within the Dart catchment. From youngsters to elders, people were asked to consider what their favourite places and memories of the river were, if the river were a person what might it look like, who might it be friends with, what the hopes and fears of the river might be, and indeed, what might the river dream about? By inviting people to pause and reflect on what they value about the river, how they feel about it and how the river might feel, we aimed to trigger people’s compassionate values. Personifying the river, rather than objectifying it, aimed to strengthen this effect. 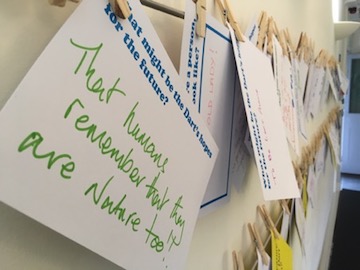 Over four-hundred people have so far taken part, and what is immediately striking is that what people most value about the river is its intrinsic, rather than extrinsic value: the sense of inner harmony, peace and wisdom it evokes. This clashes strikingly against the self-interested values described in ‘professional’ documents about how the Dart is currently managed. This presents formidable challenges – whose values count? How do we negotiate a path through these conflicting values? This journey is ongoing and it has not always been easy. But now these values have been brought to public consciousness, it’s hard to see how they can be bottled up again. 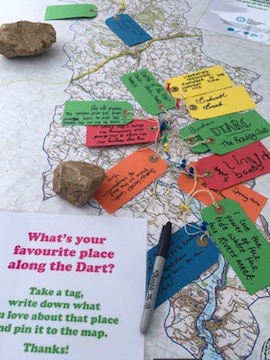 So – what might the river dream about? Well according to many of the people of the Dart it might dream of “being clean and able to roam and weave and curve and bend and come and go as she pleases” with “a belly full of eels, salmon and trout” then “slipping into your skin and calming and strengthening your spirit”, it dreams of “a world where ‘the people’ and ‘the river’ are one”. Dreams masking latent beliefs that are, after all, perhaps not so far away from those of the Maori. And perhaps through engaging people with their values about the environment we can help re-awaken their dreams and demands for a more ecologically sensitive world.