What values were drawn on by the Remain and Leave campaigns?
This is a blog by Tom Crompton
Tom is a member of staff at the Common Cause Foundation.

What values best predicted a vote to remain in the EU in the 2016 Referendum? Were these values the ones that the Remain campaign drew attention to? And what of the preponderance of talk about the economy in communications from both sides (but especially the Remain campaign)?

Last year we asked 1200 people across Greater Manchester about their values and how they voted in the EU referendum. Reflecting on this, we are publishing a short briefing that summarises the key findings from this survey, and reviews some possible reasons for the success of the Leave campaign.

People who attached above average importance to Universalism and Stimulation values were more likely to vote Remain. Yet these were values that were largely ignored in Remain campaigning. It seems possible that strategists in the Remain campaign may have fallen into the trap of underestimating the importance that typical citizens – across demographics – attach to Universalism values. As our previous work has shown, most people underestimate the importance that typical fellow citizens place on Self-transcendence values, such as those in the Universalism group: mind the ‘perception gap’. 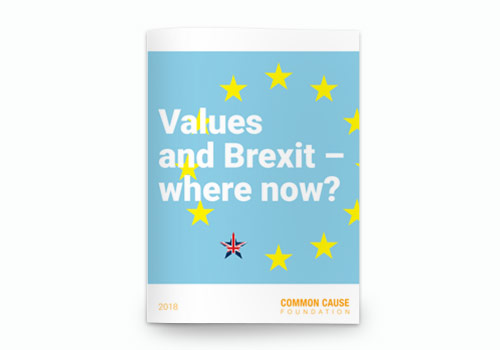 Rather than focusing on Self-transcendence values, the Remain campaign focused disproportionately on economic concerns. Yet campaigning in this way may have connected with values in the Power group, which were the least important values to citizens across Greater Manchester (and indeed the UK as a whole). Moreover, Power values had the weakest association of any group with the way that people voted in the Referendum.

Perhaps the most striking finding from the research was this: From the patterns that we found, we would have predicted that Self-direction values would have been natural territory for Remain campaigners. But these values were of course appealed to highly effectively by Leave campaigners – for example, through the overall theme “Take back control”. Our research found two discrete groups of Leave voters – those who attached high importance to Security values (and low importance to ‘opposing’ Self-direction values), and those who had high Self-direction values (and low Security values). The Leave campaign, we suggest, effectively engaged both groups.

Today, the Leave campaign is in a strong position to continue to communicate on Self-direction values. These are implicit, for example, in the suggestion that “the people have spoken” and that to argue against leaving the EU, or for a softer Brexit, is to argue “against the sovereignty of the people”.

In contrast, those campaigning to remain in the EU, or for a softer Brexit, still fail to connect decisively with values of Self-direction and Universalism, value groups with latent potential. As we point out in our new briefing, these arguments are there to be made. Those campaigning against a hard Brexit would do well to advance them.