How can we build on shared values to grow solidarity across different causes?
This is a blog by Tom Crompton
Tom is a member of staff at the Common Cause Foundation.

Love for our fellow humans and other living beings isn’t a finite resource that depletes with use, and for which different groups must compete. It grows stronger as its focus is broadened.

Social and environmental concern isn’t a zero-sum game. Strength lies in building on shared values to establish solidarity across diverse causes. Building linkages between causes multiplies our commitment to address these challenges. In this way we become more than the sum of our parts.

This year, we’re launching a new conversation to help build deeper connections between groups and networks that are engaged on issues which may currently seem unrelated. This blog outlines some initial ideas, and hopes to encourage you to want to join this conversation to improve on these ideas, and to help to take them to the next stage (there’s a bit more on how to do that at the end).

We’ve taken nature conservation as an example of what we have in mind – but it is just that: one example.

Progress on conservation is intertwined with progress on a wide range of other causes, including many that may seem far removed from the conservation debate. Our own research has shown, for example, that the values with which we connect in communicating about nature conservation have an important impact on concern about a seemingly unrelated issue – disability rights. And the reverse is also true.

Support for conservation issues could become widely understood as just one particular way of expressing shared values of justice, compassion, community and love for all life: values which, as a large body of evidence demonstrates, most of us prioritise.

Take, for example, something we hear a lot about: immigration. People who celebrate human diversity are likely to express deeper concern about threats to other species, and vice-versa. It seems that suggests there is a common component of prejudice that underlies specific prejudicial attitudes such as racism, sexism, homophobia as well as speciesism.

Yet links of this kind are rarely made. Networks of people working on conservation remain almost completely silent on immigration, though they would do well to build on people’s shared concerns for justice, compassion, community and love for all life.

Most people who give a hoot about the myriad other creatures with which we share our homeplaces (however geographically broad we think of these), also care about those of our own species who are downtrodden or who encounter discrimination or prejudice.

Currently, narratives around conservation tend to run scared of forging links to wider concerns – perhaps because conservation groups fear losing the support of people who care deeply about conservation but who are not mobilised by social justice concerns. But Common Cause’s evidence and practical experience show that such concerns are misplaced. The caricature of the “misanthropic bunny-hugger” is, it seems, the exception that proves the rule.

So there’s an opportunity here to engage audiences with a particular interest in conservation, celebrating these synergies, and creating new associations around ‘conservation’.

If this opportunity (and countless other analogous ones) is to be seized, it’ll be because people with diverse skills – social and environmental activists and campaigners, writers, digital creatives, artists, organisers – come together, united in their desire to help build new joined-up movements for change. 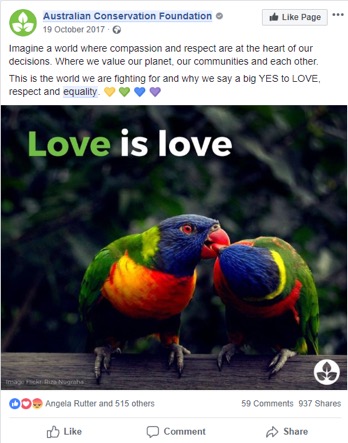 Such conversations must, necessarily, be inspired, convened and sustained through the shared commitment that participants feel towards values of love, compassion, helpfulness, equality and social justice. These values would need to be kept at the heart of how participants collaborate, and we would need to consider carefully how these values were nurtured and celebrated.

Working together, participants in such a conversation could generate compelling new narratives and material, to be used both online and offline, showing how debate about conservation is rooted in the shared values that infuse wider social and environmental concern.

The campaign message here, which shows two rainbow lorikeets, was a contribution from the Australian Conservation Foundation to a recent debate about same-sex marriage in Australia. (Angela Rutter, the inspiration behind the messaging, now co-directs Common Cause Australia). The banner image to this blog is another image, which we’ve mocked up ourselves to give a further example of the kind of messaging we have in mind.

But while such images are illustrative of the approach we are seeking to nurture, we’re interested in the longer-term goal of reframing the way in which conservation is talked about.

Our invitation is for you to join a conversation of people with diverse skills – campaigners and communicators with expertise in engaging different audiences on diverse social or environmental issues; digital creatives; writers; artists; network organisers; project managers, or anything else!

…If so, please drop us a line and we’ll be back in touch as we work out further plans for convening development conversations (virtually or in-person).