The values endorsed and normalised by treating people as consumers are at odds with the values we need to tackle climate change.
This is a blog by Jon Alexander
Jon is the Founder of the New Citizenship Project.

Last week’s publication of the first instalment of the new IPCC report is a vital moment to be seized upon. It presents a fresh chance to put the issue of climate change back where it should be as one of the most fundamental modern global challenges: at the top of the political and social agenda.  As has happened before, it will provoke a round of inquiry into why nothing (or at least nothing commensurate with the scale of the problem) has been done, and why we continue to run still further off the edge of a very high cliff.

In the recent past, the primary revision to the strategy of environmentalists has been to say we need to change the story.  We have talked too much doom and gloom, and we need to paint a positive vision to motivate Consumers to change the world.

This change of story has moved things on a little (as per my previous post on Martin Luther King), but we now need to take the next step.  The story is better; we have improved WHAT is said.  Now we need to change the audience; WHO we are talking to.

We have to face the fact that Consumers will never solve climate change.  Only Citizens can do it.

Here are the four big reasons:

#1: Consumers will always buy what is easy over what is true

The headline of the new IPCC report is that scientists are now 95% certain that climate change is happening, and is caused by us.  Certainty in science is a tricky concept (as the National Physical Laboratory’s Jane Burston reflects here); in anyone else’s language, this means it’s utterly beyond doubt.

But despite this, the Yale Project on Climate Change Communication reports that while scientists know climate change is happening and is caused by humans, only 41% of American citizens believe them; lest we think we are better, a recent YouGov poll put the figure in the United Kingdom at 43%.

This is because we talking to Consumers not Citizens. We are trying to sell a truth that is difficult to perceive and would be difficult to act upon (though ultimately deeply rewarding) to people in a role that does not incentivise comprehension. The scientific conception of certainty means that a tiny iota of doubt is available for other parties to sell an alternative view, many of them in the pay of the fossil fuel industry and exactly the same people who fought for many years to persuade us that tobacco was safe (as revealed in the excellent book Merchants of Doubt).

In Consumer terms, we have a market stall selling expensive, prickly, difficult to peel, but ultimately nutritious fruit whose taste we would acquire but only if we persist; the sceptics have chocolate.

#2: We need big actions – Consumers only ever take small actions

Arguably the most successful element of the environmental movement over the last decade has been the increased engagement with businesses.  Some astounding shifts forward have been made with companies like Walmart and Unilever.  This is one of the positive results of changing the story.

But there is a limit to what can be achieved by this.

At the end of the day, strategies like Unilever’s “Small Action Big Difference” will only ever put a tiny dent in the change that is required, and often not even that, as Consumers tend to think that doing one small action entails ‘doing their bit’ and subsequently incur far greater damage in other behaviours, a phenomenon explained in depth by the seminal WWF report ‘Weathercocks and Signposts’ but perhaps best expressed in this Tesco ad from a few years back. 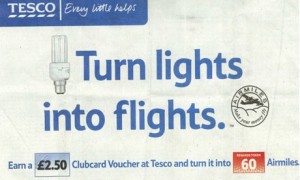 The only value of these small actions – and to be fair to Unilever et al it is a significant value if it can be made to follow – is if they do genuinely lead first to the big Consumer actions (like, for example, deciding not to fly long haul); but ultimately and more importantly to actions that step beyond the role of the Consumer and into the realm of the Citizen (like voting for the party with environmentally positive policies).

#3: Consumer values are fundamentally opposed to the values we need

Perhaps the key advance in our understanding of the change we need to make in the last 5 years has come in the field of social psychology, with the work to popularise the academic literature on cultural values.  This began with the WWF report mentioned above, and has now spawned an organisation of its own, the aptly named Common Cause group.

Dr Tom Crompton’s TEDx talk is probably the best quick introduction, but the vital fact for current purposes is this: the strategy of appealing to what is called extrinsic values reinforces the importance and vailidity of those values in people’s minds, and those values are opposed to action on things like climate change.

Let’s make that concrete.  If I persuade you to buy an environmentally friendly car by appeals to status (for example by encouraging celebrities I know you admire to drive them), I may achieve my goal of encouraging that purchase, but because I have normalised the belief that status matters, I have actually made you less likely to do more.  The empirical evidence here backs up the common sense argument that, to the extent that people value status, they are more interested in promoting themselves at the expense of others, and less interested in (or even actively ill-disposed to) the wellbeing of those they consider separate to them – which includes of course the distant ‘global environment’.  The impact is so pronounced that even changing one word on the title of a survey (from ‘Citizen Response Study’ to ‘Consumer Response Study’) has a dramatically negative impact on pro-environmental motivation.

This bridges into the massive issue with Consumerism as a wider social mode, as I explored in an earlier post.  Stepping outside communications that actually aim to create positive change (which are of course very much in the minority), almost all advertising talks to people as Consumers and embeds these unhelpful values and the validity of narrow self-interest.  When we expose ourselves to these messages 3000 times a day, we make commensurate individual action on climate change (and a number of other issues) fundamentally impossible.

#4: Climate Change is a collective action problem; Consumer states will only ever have a mandate to act as individuals

This is not just a problem at the level of the individual, however. These cultural values, and the primacy of individual self-interest to which they add up, mean we will never solve climate change at an international scale while we see ourselves, as individuals, as Consumers.

Climate change is no one individual’s fault, either at the level of the person or the state. Nor is it any one individual’s problem. It is what philosophers call a tragedy of the commons. In a system where a number of people own sheep and the right to graze them on common land, all is well until each shepherd, acting in her own rational self-interest, maximises her herd. When they all do this, the common land can no longer cope. It is not any individual shepherd’s fault, nor is it any individual shepherd’s problem – even if one backed down, others would only expand into the space, so why should she?

The only way the shepherds can solve their problem is to perceive and act upon their collective interest.  In practical terms, this usually means the appointment of an independent third party mediator, and a willingness to concede ground on all sides – what is in this case being attempted by the UN process.

The problem is that the political mandates of the negotiating states – their opportunity to concede ground and thus achieve a compromise – are dictated by their publics.  When those publics are Consumers, it is only to be expected that nothing is achieved.  We have seen the truth of this not just on climate change, with its most famous public failure in Copenhagen in 2009, but on trade, aid and all number of other global situations.

The idea of the Consumer, while it has been around for some time, has only been dominant for a very short period, I would argue the last 30 years at most.  The Consumer has his place in a healthy society – we do not need to eradicate him.  What we do need to do is put him back in his place, and encourage the Citizen to step up, a role whose core elements include membership of a community, a sense of collective interest, and an understanding of duties as well as rights.

It will however require us to fundamentally change our political and social discourse, led by key public service institutions such as the BBC and the NHS.  It might require restrictions on advertising, particularly to children and possibly beyond, such that we create the space to think of ourselves in different ways.

These can be creative opportunities, not just limitations.  The society we create can and will be more participative, more enjoyable, and more deeply fulfilling.  We will no longer belittle the potential societal contribution of “mere consumers”, to use Pope Francis’ words.  The prickly fruit is worth the peeling.  But this is a truth we can only engage people in as Citizens.  We will never sell it to them as Consumers.

This blog first appeared on the New Citizenship Project.